Meredith Baird is here to talk about cold weather and cappuccinos! Not any cappuccino though, this time it's a carrot cappuccino! No coffee. Totally RAW VEGAN high vibe food. Caffeine Free, spicy, warming, smooth and creamy. Take it away Meredith...

This Monday morning I woke up to a mix of rain, snow, and freezing cold- The car was snowed in so I wasn't able to go to my normal workout, and needless to say, I did not want to go to the grocery store. Surprisingly, I was kind of happy! An excuse to get some work done by the fire and just stay tucked in. Rather lovely.

There was the Oh! Crap! Do we have anything I mean ANYTHING for breakfast?

I looked in the refrigerator and found 3 massive carrots and that was basically it- carrots are not my #1 breakfast food. Fortunately- the problem was solved because I had some frozen bananas in the freezer. Carrot + Banana = Perfect!

We make a delicious version of a Pumpkin Spiced Smoothie in our program at Matthew Kenney Culinary- so I decided to whip up a slightly tweaked version of my own. I was too lazy to make nut milk etc. so I just made an 'in the blender' pecan milk. Mine was a little less heavy on the banana which made the texture light and fluffy with a little froth on top, so I decided to call it a Cappuccino - but, it is really just a smoothie.

This was really so delicious and satisfying! The lighter texture was really nice for a cold day because it wasn't as heavy on the frozen stuff. Ginger, cinnamon, cayenne- and all the warming spices were perfect. 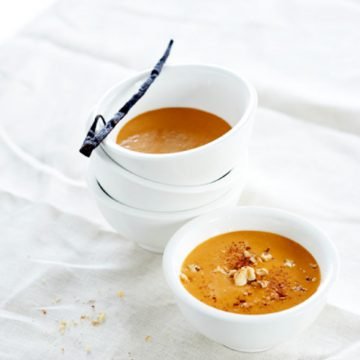 A detox version of a coffee-style cappuccino. This caffeine-free version tastes delicious and wakes you up with the energy and life force it contains. Totally raw vegan, made with organic, clean and healthy ingredients.
Print Recipe Pin Recipe
Course Breakfast, Coffee, smoothie
Cuisine American, Raw Vegan