I can finally eat a (vegan) Egg Breakfast Burrito. It's been so long since I have had anything this similar to the original. Add Kimchi Mayo and this breakfast burrito is over the top gourmet, creamy, hearty, and tangy.

Hey everybody, it’s been awhile. I’ve been caught in a Mom rut lately but I’m back and ready with a few of my favorite recipes as of late. Have you guys had JUST eggs yet? Never heard of it? The makers of JUST mayo created an egg scramble batter that looks and tastes just like eggs. It’s made from none of there than mung beans! I have made it way too many times; my kids are sick of scrambled eggs and omelets right now.

And if you haven't tried Wildbrine Sriracha Kimchi sauce you'll be mind blown. It's extremely healthy as its fermented.

It felt like I was a kid again after eating this vegan egg breakfast burrito because I haven't eaten anything even close to similar to the real thing this since I was a kid. This recipe is super simple, super basic, and filled with protein from the sausage and egg. My no longer secret secret kimchi mayo sauce is magic, and one of my favorites right now. Add a dash of Chulula and you’re golden. We added some garlic sauce (we use this in quesadillas, on pizzas and wraps as well) to our tortillas but it's optional. Use tortilla of choice is key - go gluten-free or whole wheat, but whatever your family enjoys will work. For us, its the softer the better so it holds together well and tortilla doesn't break.

Just mix these together in a bowl and voila!

Add some spinach or arugula for added fiber and nutrition. We love the Field Roast apple smoked sausages right now, so we added those too. It’s ridiculously filling and full of plant-based protein. This could be lunch or dinner as well. No need to limit yourself to breakfast. You’ll be so glad you made these, go for it! Let me know what you think…message me or post your own photos on Instagram. 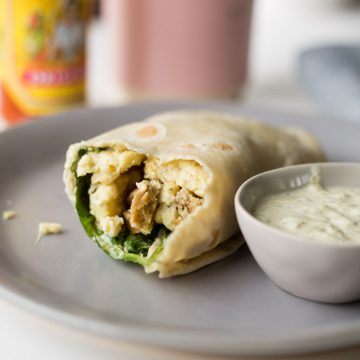